Eliminate the cost of 50 operators

The use of Aquajet’s Hydrodemolition technology has dramatically reduced labour costs on the construction of part of Singapore’s new Downtown Line; eliminating up to 50 jackhammer operatives.

The Austrian tunnelling contractor working on a section of Singapore’s new Downtown MRT Line has been able to save on the cost of up to 50 jackhammer operators by using an Aquajet AQUA CUTTER 710V Hydrodemolition robot system on three of the underground stations. 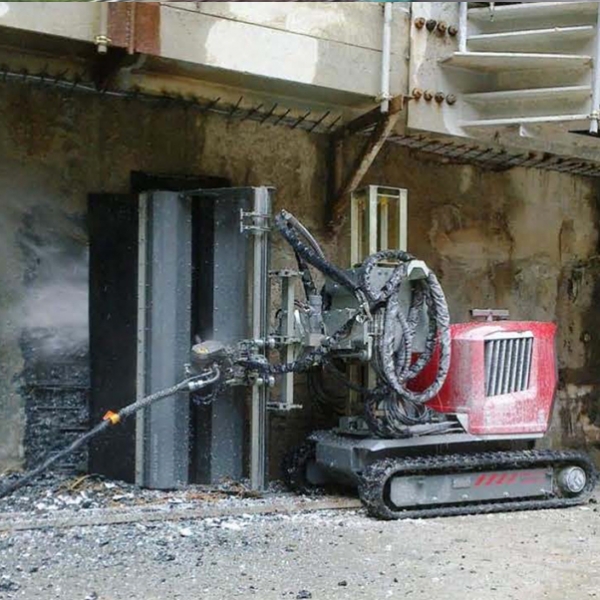 The machine from leading Hydrodemolition specialist Aquajet Systems AB, is the first to have been sold in Singapore, and the Southeast Asia region, by the Swedish manufacturer’s new distributor for Asia, Asia Waterjet Equipment Pte Ltd (AWE).

The two sections involve the construction of three new metro stations and single-track metro tunnels to a length of 5.72 km constructed by tunnel boring machine, and a further 445 m by the cut-and-cover method. The contract value for both sections is S$670.74 million (322 million Euros).

Christopher Parkhill, Regional Sales Manager for AWE, says that the Tan Kah Kee station, owing to its civil defence status, had extra-deep piling and station walls that are formed from an inner and an outer skin.

“There are large surfaces where the concrete has to be removed and the reinforcement rods bent to connect the two walls,” he says.

“The other two stations, which are more conventional in structure, also require the concrete walls to be smoothed and the rods to be freed up and bent back.

“The contractor had in total about 14,000 m² to remove and would conventionally have used jackhammer operators. Given the area, and the timescale, he would have needed a large force of contract workers.

“In the event, not only was the contractor saving on the labour by using the AQUA CUTTER Hydrodemolition techniques, he was improving productivity with the system removing between 110 m² and 150 m² per day.

“To achieve this kind of work rate he would have had to use somewhere between 30 and 50 jackhammer operators.”

Christopher Parkhill went on to say that engineers from Sweden, in association with AWE’s own personnel, undertook training for the AQUA CUTTER 710V, and that the machine was soon working to optimum levels.

“The learning curve was very fast, and we were soon able to bring in other companies who are considering investing in this equipment, so that we could show them the AQUA CUTTER in action.”

Only recently introduced, the latest generation AQUA CUTTER 710V robot is considered the most versatile Hydrodemolition machine on the market. It is suitable for all operations such as horizontal, vertical and overhead applications.

Designed for working on bridges, tunnels, roads, parking garages or overhead roofs, the robot works typically 1000 bar pressure and 250 l/min. It handles removal depths down to approximately 1000 mm of concrete if required.

Extended free standing, vertical reach up to 7 m is achieved.

The 3-D positioning of the front power head gives the operator full freedom to reach all areas.

“When obstacles were encountered the machine simply went round them,” says Mr Parkhill. “A jackhammer operator would have been slowed down.”

Average concrete grade being worked on was 40, and the AQUA CUTTER 710V was removing between 60 and 85 mm concrete thickness on average. Other areas required as much as 120 mm to be removed.

Featuring a sturdy base, the latest model also offers a 4 m extended working width as an option and track widths up to 1.64 m as standard, to ensure even further stable application.

Christopher believes that Aquajet’s technology has great potential in Singapore, especially now that the Singapore government is offering grants and incentives for contractors to modernise, and thereby reduce the reliance on contract workers from overseas.

“With further expansion planned for the MRT, and applications in the shipbuilding and repair industry, Aquajet is here to stay,” predicted Christopher Parkhill.