Train tunnel in the Swiss alps 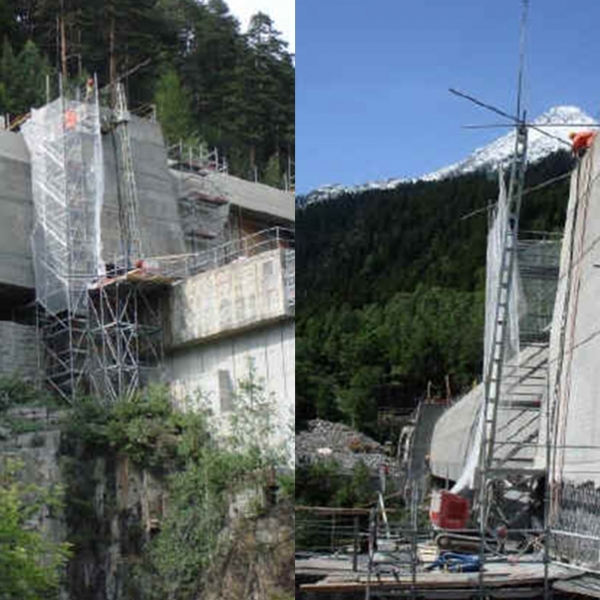 Opened in 1882, the Gotthard rail tunnel remains one of the world’s spectacular railway tracks, winding through the Swiss Alps; but requires constant routine maintenance on its bridges and tunnels.

To the north of St Gotthard above the river Reuss, in addition to the twin rail track, the A2 motorway climbs at a gradient of 5º. The rail track however winds its way through a series of helical tunnels to the entrance of the Gotthard tunnel.

En-route, a concrete ‘tunnel bridge’ constructed 18 years ago crosses the 50m deep-sided valley. Formally a steel bridge built in 1882 as an open bridge, it was exposed to avalanche.

In the winter of 1998, the avalanches virtually filled the valley with snow virtually to the ‘bridge-tunnel’.

Recent tests have shown that the 88.50m long bridge could have been swept away with the next avalanche winds.

According to Executive Engineer, Mr Bühlmann, the Swiss Federal Railway SBB commissioned a study to make the bridge safe.

Its findings have opted to reinforce the bridge and tunnel; restore the bridge bearings; refurbish cracks up to 2m deep; and connect the tunnel bridge with special wall anchors to the rocks. Together with reinforcement for avalanche-loads, the bridge will be maintained and damaged concrete replaced.

The Aqua Cutter was used for the ‘lions share’ of remedial work; with a hand held gun removing some remaining small areas.

The electric-powered robot used 122 l/min of water at a pressure of 1900 bar to safely remove the designated damaged concrete without causing any harm to the exposed steel rebar.

An important new feature of the new Aqua Cutter is the removal of all sensors and electric cables from the front of the machine eliminating ingress of water, grease and dust problems.

The Aquajet EDS system allows for unbeatable lance angle of ‘attack’ without wasting energy from the jet of water. As much as ± 45° on the Evolution model can be selected; ensuring full removal of concrete between and under the rebars.

Ordered through local distributed Atümat AG, the Aqua Cutter was chosen for its versatility, ease of operation, ease of transportation and its compact and lightweight build.

The unit, operating at an altitude of 1300m was lifted into position by crane and installed on the opposite side of the valley.

In order to cut 20mm of concrete on the outside of the tunnel bridge, Brügger opted to top the Aquacutter 6m standard tower with an additional 5.5m tower element to reach a maximum height of 11.5m.

The robot tower was set to match the 10° inclination of the tunnel wall using a special support. The robot power head remained constant and accurate operation on the 11.5m high tower. Even at its highest position the roller beam was reported to have remained very stable

According to Daniel Rimle of Brügger, the company won the contract by proposing the best technical solution. “I am convinced that the Aqua Cutter robot will prove to be the best investment.