Hydrodemolition is a technique that uses a high-pressure water jet to remove areas of loose, deteriorated and damaged concrete from structures and buildings. Examples are bridges, pillars, roads, parking garages, power plants and other engineered construction. The technique offers numerous outstanding benefits compared with the traditional use of handheld water jet equipment, milling machines and jackhammers.

With the Hydrodemolition process a “craggy” profile in the concrete is produced. This craggy surface provides a greater area for bonding, resulting in a significantly stronger bond than can be achieved with the use of jackhammers, milling machines or other mechanical removal methods. Another advantage is that the sound concrete and the steel reinforcement remain unaffected by the hydrodemolition process. With Hydrodemolition, micro cracks and damage to rebars caused by the impact of jackhammers or other mechanical removal methods are no longer a concern. 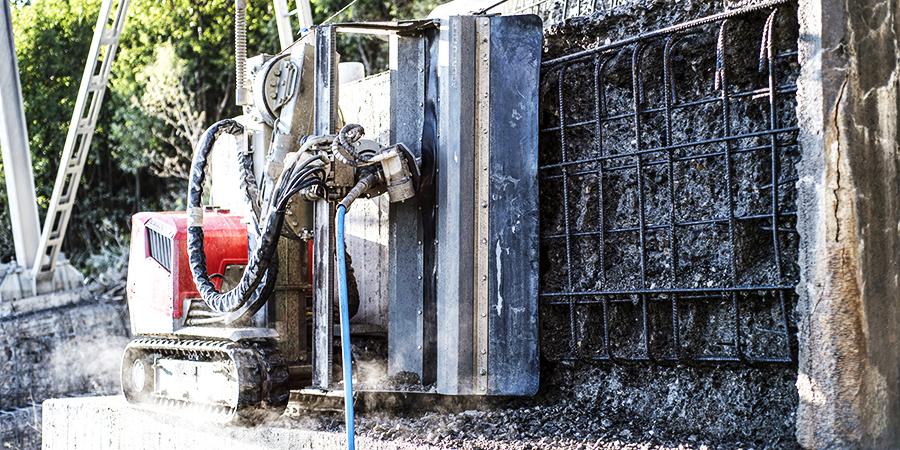 The key element of Hydrodemolition is to pressurize and widen existing pores and micro cracks in the weakened concrete structure using high-pressure water penetration. Material is removed as the build-up pressure exceeds the tensile strength of the concrete. In addition to the water pressure, the volume of water also contributes to the system’s efficiency. The rate of removal, for example, depends not only on the water pressure but also on the amount of water directed towards the concrete surface in order to rapidly and continuously pressurize the areas being treated.

This combination of water pressure and flow, together with the precise robotically controlled movements of the water jet nozzle, creates the necessary effect criteria for the Hydrodemolition process.

The nozzle is moved rapidly and continuously over the set area to be removed. The jet efficiency is maximized when the jet itself is stable, and stability is influenced by the machine design, the distance from the nozzle to the point ofimpact, the shape and configuration of the nozzle, the water exit speed, the jet’s movement and the angle of attack.

Compared to other methods, such as chipping hammers and handheld water jetting equipment, robots reduce labor and minimize the risk of injury. Robots also perform repeating cycles 24/7, which means that you get the same speed, the same performance and the same quality from start to finish. Also, increased speed of concrete removal reduces the total project time.

Hydrodemolition is applicable to all concrete structures in need of refurbishing, repair or cleaning. The method can also be used under water.

Hydrodemolition creates a rough, irregular surface profile, providing an excellent mechanical bond for repair. The exposed aggregate of a water jetted surface has much greater bonding area than that created by jackhammers or sandblasting. Independent “pull off” tests have shown that the bonding strength is much higher than that of a surface prepared by jackhammers or other mechanical methods. The average failure stress is outstanding while using robotic Hydrodemolition and exceeds 2,4 kph (1.5 MPa) up to more than 3,2 kph (2 MPa).

The use of jackhammers and milling machines tends to leave layers of dust and damaged concrete with small cracks extending between 10 – 20 mm (0,39 – 0,79 in) into the residual concrete. This means that the surface is not ready for new concrete and may spoil the bonding for the new concrete casting. 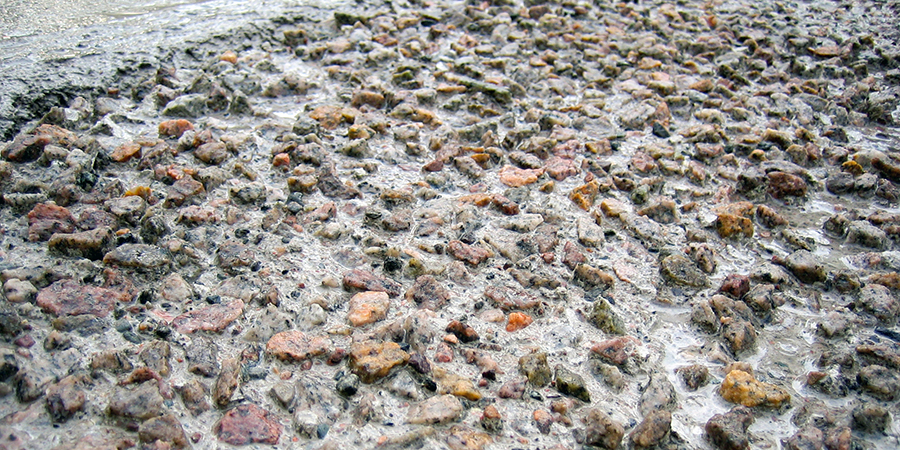 Hydrodemolition is impact-free, avoiding vibrations that loosen rebar and cause micro-fractures, protecting the integrity of the substrate.

When you use other methods, such as jackhammers and milling machines, the rebars are left rusted and damaged. The vibrations from mechanical tools are also transmitted to the rebars and jeopardize the bond in the concrete that needs to be left intact. Nor do milling machines remove the concrete below and directly underneath the rebars. With Hydrodemolition you don’t have to worry about any of that.

As Hydrodemolition is impact-free there is no risk that the area treated will suffer any impact or vibration damage. Also, with Hydrodemolition all rust and scale will be removed from the rebar, leaving the surface intact.

Silica dust, a mineral released in the air by cutting, grinding, drilling or otherwise disturbing materials such as concrete, masonry, rocks and granite, can cause diseases like lung cancer, asthma, chronic obstructive pulmonary disease and silicosis. With Hydrodemolition, the risk of being exposed to silica dust is virtually eliminated due to the water that prevents the mineral from becoming airborne as dust.

LCC analysis done by The Swedish Cement and Concrete Research Institute (CBI)* shows that Hydrodemolition is a more favorable method with a repair life expectancy of 21-35 years compared to 7-12 years with mechanical chiseling.

Less interference in the infrastructure

Both the socioeconomic effects of disturbance of the infrastructure and the environmental disturbance during, for example, repair work on a street, are something to consider for all contractors. Sound, vibrations, space and time, they all have an impact on those. 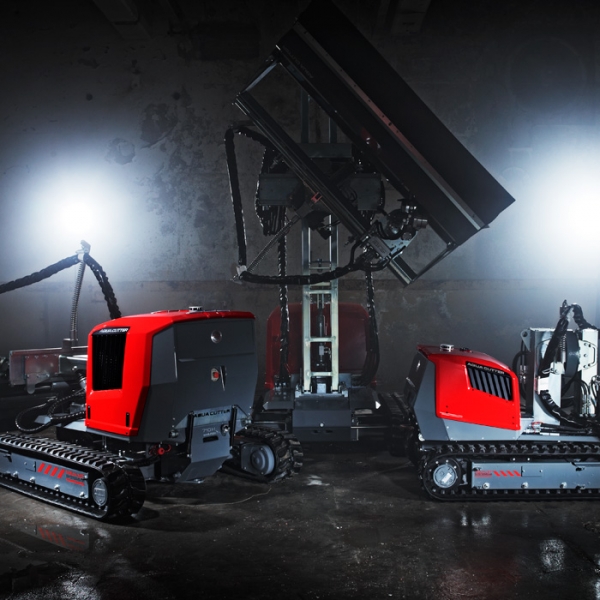 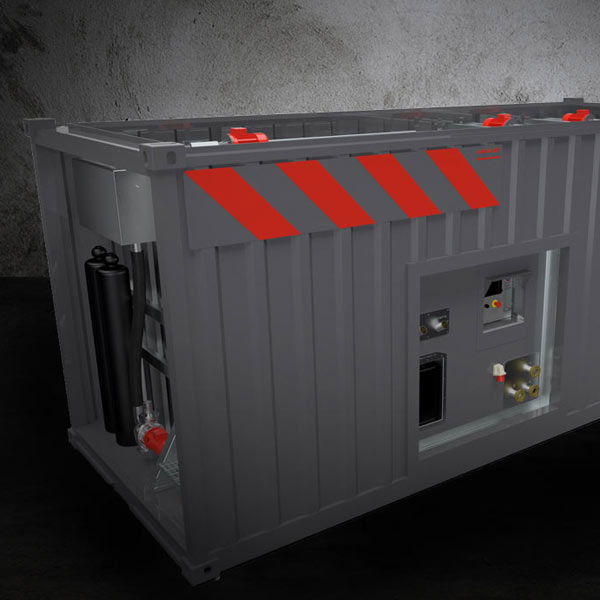 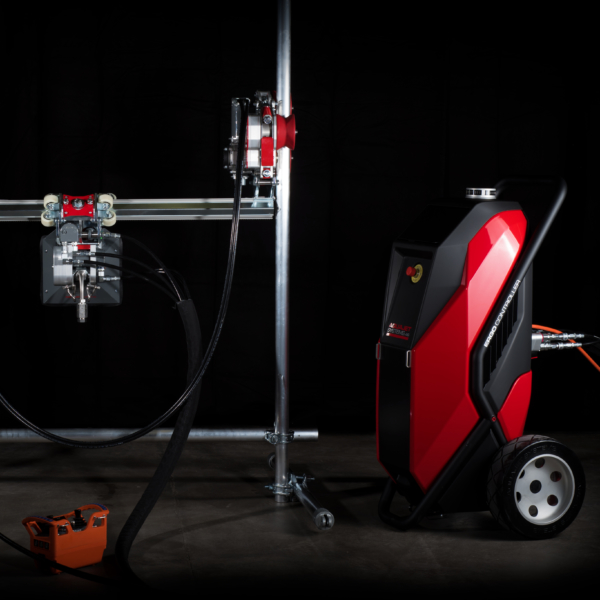 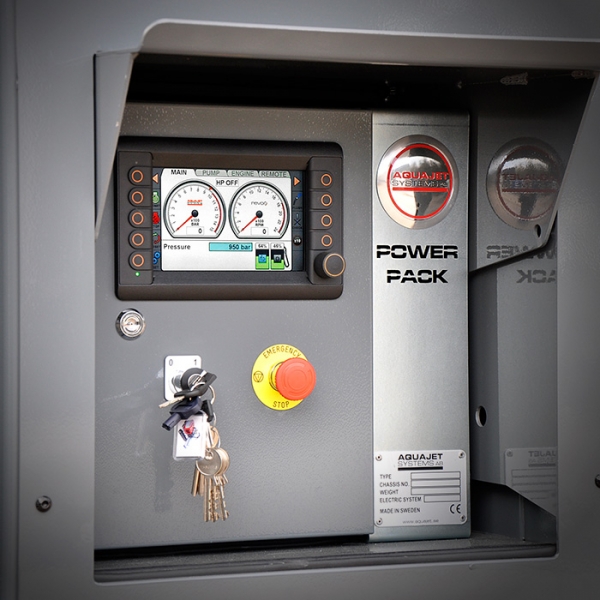