An Aquajet HVD robot was recently employed to rapidly remove the surface concrete of the Motala Ström dam wall at Norrköping, south of Stockhom in Sweden, prior to its resurfacing. 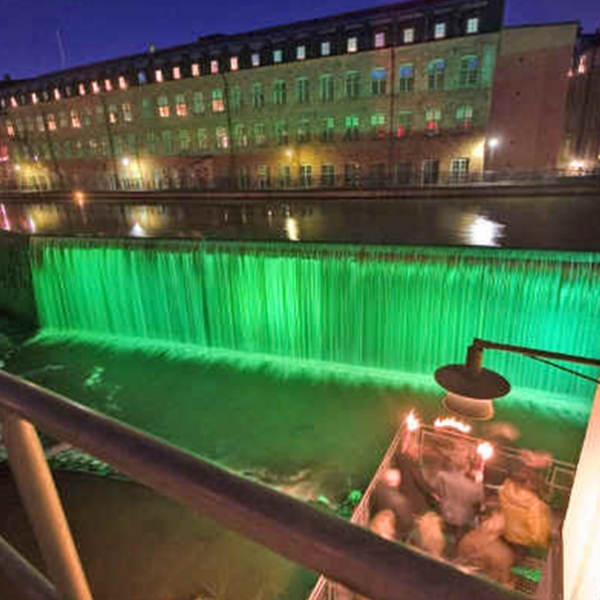 Norrköping’s striking Industrial Landscape area celebrates the town’s past as a textile manufacturing centre, and the old factories have been comprehensively transformed into offices, entertainment centres and educational facilities.

The former Holmen paper factory is now the Louis De Geer Concert and Congress Hall, named after the factory’s founder, known as the father of Swedish industrialism.

Another key feature of the area is the illuminated waterfall which runs between the Stålbom paper mill and hydro-electric plant to a former cotton mill, which is now a student campus.

The waterfall is illuminated at night and during the winter changes colour every half hour. Its surrounding outdoor areas are a popular attraction.

Initially renovated in 1991, the dam wall behind the waterfall, which is around 140 m in length and 8 m high, has had to be strengthened.

Following re-routing of the dam, the hydrodemolition work allowing reconcreting to take place was carried out by ISS Industriservice AB for main contractor DAB, employing their Aquajet HVD robot fitted with the new ISC control.

The patented Intelligent Sensing Control (ISC) has no sensors or electric cables at the front of the machine eliminating ingress of water, grease and dust problems. An on-board computer, which can be programmed by the operator, automatically controls and manipulates the pre-set movement of the waterjet nozzle and the tracks or vertical hoist.

By combining the fluid dynamic, geometric and kinetic parameters of the control system, the Aqua Cutter will optimize the settings and apply the minimum required force to the material, removing only the deteriorated material.

Good sound concrete is left untouched and the reinforcement steel is left clean.

In total, around 45 m3 of concrete was stripped away to the rebar – to an average depth of 5 cm – by the high pressure water jet system.

The HVD removed an average of 0.9 m3 of concrete an hour, with the high pressure power pack PP480 operating at a pressure of 800 Bar, connected to the robot with a 100 m-long hose. The pump’s maximum pressure is 1000 Bar with a maximum water flow of approximately 200 litres per minute.

“In addition to its incomparable speed, another important advantage of the hydrodemolition process is the elimination of microcracks in the remaining concrete,” said ISS specialist in the process Jörgen Boström. “Where there are cracks, there is air, and with air in the structure there’s always the possibility of movement when temperatures change.”

“Another advantage over traditional demolition methods, is that the water jets will get right behind the back of the rebar struts and remove the concrete,” he added.

“You also, of course, have a completely clean and dust-free surface to work on when bonding the new concrete, which is not the case with jackhammer removal.”

There is no vibration to the surface using the HVD robot, which also allows controlled and selective removal, minimising the waste of good concrete and secure removal of the deteriorated concrete.

It also does not damage the rebars and causes no additional structure damage, in addition to eliminating the risk of operator injury caused by either vibration or heavy lifting.

“The HVD is the most comprehensive in the programme and can operate either horizontally, vertically or under-up to a height of 6 m free standing, as standard,” explained Aquajet Systems Sales and Marketing Manager Jan-Åke Petersson.

When operating vertically above 6 m the tower of the robot issecured in position at the wall, as was the case for finishing off this job, with the height of the dam wall being 8 m.

The demand and popularity of hydrodemolition is now growing worldwide, Mr Petersson added.

“In Sweden and other Scandinavian countries, no other form of demolition is employed in the repair of structural concrete such as bridges. It is also now being specifiedin various German states,” he said. “In addition, a new EU Standard is expected shortlyand we believe it will push hydrodemolition even more forward.”

Hydrodemolition is also gaining popularity in new markets such as India, China and Russia. “>Now these countries are looking more at long lasting repairs and efficiency,” said Mr Petersson. “The lifetime for maintenance and rapair carried out using Aqua Cutter hydrodemolition can almost be compared to the lifetime guaranteed by new constructions.”

The renovation is running on schedule, and Norrköping will have its beautiful illuminated waterfall back.