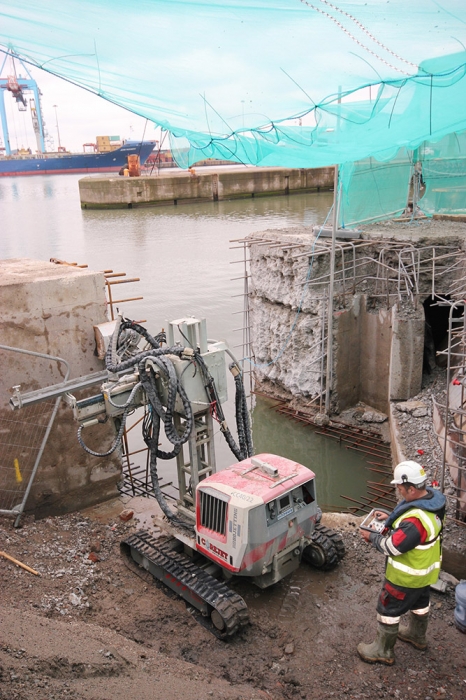 On taking delivery of the UK’s first AQUA CUTTER 710V Evolution  robotic hydrodemolition unit – and the 50th AQUA CUTTER 710V delivered globally by specialist manufacturer Aquajet Systems AB – Scottish contractor Corecut Ltd was to play a crucial role in the preparation work underway for widening the Gladstone Lock entry and the adjacent quayside infrastructure at the Port of Liverpool, run by Peel Ports.

The increasing size of next generation cargo ships at the port means a need has arisen to expand the area at Liverpool’s Seaforth Passage and docks, which has been unchanged since its construction in 1971.

Navigating some of these ships along the 40m wide Seaforth Passage at the moment has been likened to “steering a cocktail stick through a drinking straw” and extra width will greatly improve turnaround times within the tidal windows.

Belfast-headquartered Farrans Construction secured the €9 million contract to carry out the work which will widen the passage by 20m to a total of 60m on completion. It will also see new fendering around the Gladstone Lock port entry plus a new quay wall and the existing wall demolished.

Widening works initially required the re-routing of electrical and water services between the quay areas on either side of the Seaforth Passage.

It’s here where the ability of Corecut to offer both wire sawing and Hydrodemolition services as a sub-contractor proved invaluable.

“As part of the widening works we have to demolish the existing service culvert and construct a new one across the passage,” explained Farran’s Section Engineer, Ryan Dillon.

In total, the new culvert under construction is 120m long. It consists of the risers at either side which are each 20m long, a 70m straight section under the sea bed and a further 10m section at a ninety degree angle around the eastern port side’s horizontal leg.

And quite incredibly, this entire U-Tube structure will be lowered into place by a single – if sizeable – barge.

Before this can be done, however, the receival locations on both sides of the passage have had to be cut out and removed in a controlled manner; in order to protect the integrity of the existing structure and ensure it can be reinstated following the installation of the new U-Tube.

“Pneumatic or mechanical breaking wasn’t an option due to the vibrations it would have induced,” explained Corecut Operations Director Ewan Crocker. “Drilling or hand lancing would also have required the erection of elaborate and expensive scaffolding and the use of man baskets.

“And due to the depth of the sections involved and the restricted working area – with slab depths in excess of a metre – floor and wall sawing and stitch drilling were also ruled out.

“We therefore proposed a combination of wire sawing and hydrodemolition techniques employing the Aqua Cutter Evolution 710V with its extension arms as a safe, cost effective and time-saving alternative.”

The family-run firm was founded by Ewan’s father Alistair in 1976 and is now run by Ewan and his brother Finlay, as Managing Director.

They made the decision to invest in  a AQUA CUTTER 710V Evolution Aqua Cutter late last year; placing the order through the UK dealer, Aquapower Ltd.

“We quickly recognised the potential for Hydrodemolition. It’s a natural extension of our service package and completely complements our drilling and concrete sawing activities,” confirmed Ewan, adding, “ it’s really paying dividends for us in securing contracts such as this one where we were able to beat off considerable competition.”

Corecut was the only company to propose diamond cutting and Hydrodemolition without sub-contracting to a third party; a core reason for them to order the Aqua Cutter.

The company was able to win the contract against the traditionally hand-lancing companies, who would have required the erection of elaborate and expensive scaffolding over the water.

Corecut proposed using Hydrodemolition techniques with the AQUA CUTTER and its extension arm allowing it to reach 3.5m over the side of the dock – saving both costs and time on the project.

The 710V Evolution robot is the most versatile Hydrodemolition machine on the market, with the flexibility to work horizontally, vertically and on over-head. The unique 3D positioning of the front power head gives the operator full freedom to efficiently reach all areas without limitations.

Wire sawing allowed Corecut to initially move large sections of concrete from both the receival locations over areas 3.5 metres wide and 2.5 metres long and also up to 3.5 metres deep.

In total some 260t of concrete was then removed in around 14 lifts ranging from five to 34t – and all as the busy shipping passage operated as normal around the work.

The 710V AQUA CUTTER was then brought in to remove up to a depth of 500 mm of concrete from both end walls to expose the rebar. In total Corecut was able to remove more than 26 m³ of concrete safely and efficiently from both receival locations.

A key benefit of the Hydrodemolition process is that it removes the concrete without damaging the rebar, ensuring swift re-concreting onto clear reinforcement once the U-Tube structure is in position.

It is recognised that Hydrodemolition techniques will more than double the life of any repair or coating when compared with concrete removal using jack hammers.

The AQUA CUTTER normally operate between at a pressure of 1,000 bar to 2500 bar, but Corecut  ran it successfully at 900 bar to carry out this work.

Working remotely and largely from the top of the dock walls, Corecut’s robot cut in a trapezoid pattern to remove the concrete, at certain points with the power head – which contains no sensors – working below the water line.

“Robotic Hydrodemolition provided the safest and most controlled solution for this job and the use of the extension arm and small hood allowed it to get at otherwise unreachable sections without the need for any additional temporary works,” says Farrans’ Ryan Dillon.

“It also made it possible to remove the slab which was permanently submerged below dock water level in an accurate and safe manner. The daily yield was very impressive.”

“The AQUA CUTTER can get where other equipment can’t,” adds Ewan Crocker. “It’s a natural extension of our service package and completely complementary to drilling and concrete sawing.”

AQUA CUTTER operator Chris ……. with experience of competitive units, highlighted a key feature of the Evolution 710V machine being the independent movement of each track.

“We are able to widen or reduce the width of both tracks to allow greater stability of the robot whilst working within the very compact work space dictated by this job,” he confirmed.

Once all preliminary work has been completed at the Seaforth Dock, a new quay will be installed and the existing wall demolished. The completion of the overall project is expected to be around December 2014.