Austrian hydrodemolition specialist contractor Röhsler & Co is using an Aqua Cutter HVD-6000 to remove more than 300 m³ of concrete to expose rebar for installation of new impact barriers on a 300 m elevated live highway in Vienna.

Vienna’s North Bridge is considered to be one of the busiest bridges in Central Europe with approximately 100,000 vehicles a day. 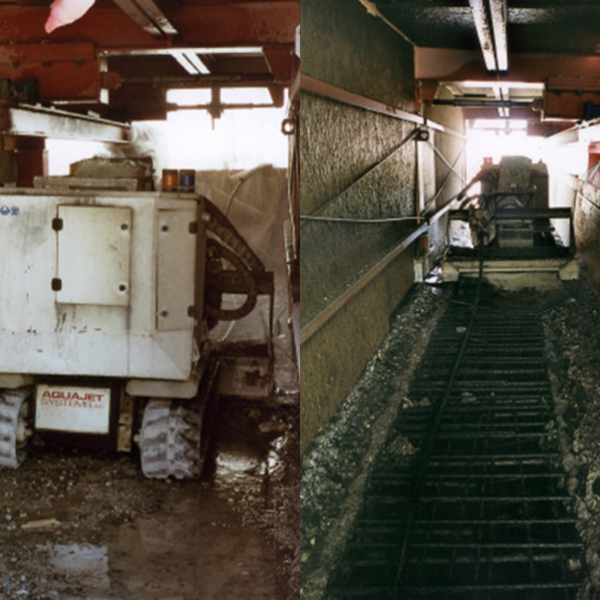 Much of this traffic, from the northern suburbs, is causing major traffic congestion with more than 42,000 vehicles daily using the A22 junction in the area of the city’s B7, B3 and Brünner Strasse in the suburb of Floridsdorf.

As a result construction is underway constructing an elevated 1.2 km extension of the A22 at Prager Strasse to alleviate the heavy traffic away from the suburb centre and improve access to the nearby shopping centre and industrial area.

Construction work started on the new extension project by German contractor Dywidag at the beginning of the year in a 20-month contract and a contract value of €100 million.

As part of the project, the opportunity was taken by the city’s Highway Authority to upgrade the impact barriers along the existing 300 m long elevated section of the A22.

Hydrodemolition techniques were the specified preferred option to expose the bridge rebar by the contractor with Austrian specialist Röhsler & Co appointed as the main sub-contractor responsible for the work.

Röhsler & Co opted to use its HVD-6000 Aqua Cutter to cut an 80 cm wide channel to a depth of 25 cm to expose the rebar, removing all the concrete along the outer edge of the highway platform.

Using a high pressure jet of water, the diesel-powered Aqua Cutter robot ‘blasts’ the concrete without causing any damage to the structure or the reinforcement bars.

In a second adjacent cut, Röhsler & Co prepared a further channel 1 m x 5 cm to expose the top rebar without causing any damage. New rebar was then embedded into the 1 m section and across to the new extended bridge edge, further reinforcing the exposed rebar.

A new 1.4 m – 1.6 m wide concrete platform was formed with a 20 – 30 cm thickness and supported by temporary formwork scaffolding.

By the completion of the project, Röhsler & Co expect to have cleared more than 2,500 m2 without any damage to the rebar or adjacent concrete.

Crossing over the Prager Strasse interchange presented several problems for the contractor, not least the height of tramlines below the bridge.

According to Project Manager, Herr B L Ludwig, “Working with a maximum heading of just 15 cm – almost nothing – was a particular concern.”

He continued, “We could not close the road or halt the trams.”

A special steel gantry designed by Röhsler & Co in collaboration with Dywidag, solved the problem protecting the passing traffic and pedestrians, and enclosing the Aqua Cutter robot.

Röhsler maintained a working section of 12 m/day determined by the repeated repositioning of the rail-mounted covered steel gantry over the edge of the highway, with live traffic including cars, trams and pedestrians below.

The HVD-6000 robot from Swedish specialist manufacturer Aquajet Systems AB was coupled to a 800 hp Woma pump supplying water at a pressure with 1200 bar and a flow rate of 200 litres/min.

Austrian hydrodemolition contractor is no stranger to Aquajet, with more than 10 years experience with the Swedish company’s Aqua Cutter systems.

According to Ing. Rainer Röhsler, all three are in constant use throughout the hydrodemolition season – determined by the end of frosts – throughout Europe as well as in special jobs in the middle east.