A small giant crosses the bridge

Swedish contractor SVB-Tyringe completes bridge repairs in Helsingborg using its recently delivered AQUA CUTTER 410 – the world’s smallest Hydrodemolition robot and one of the first in Sweden.

One of Sweden’s first AQUA CUTTER 410 Hydrodemolition robotic systems has been in constant demand since its delivery to contractor SVB-Tyringe late last year. 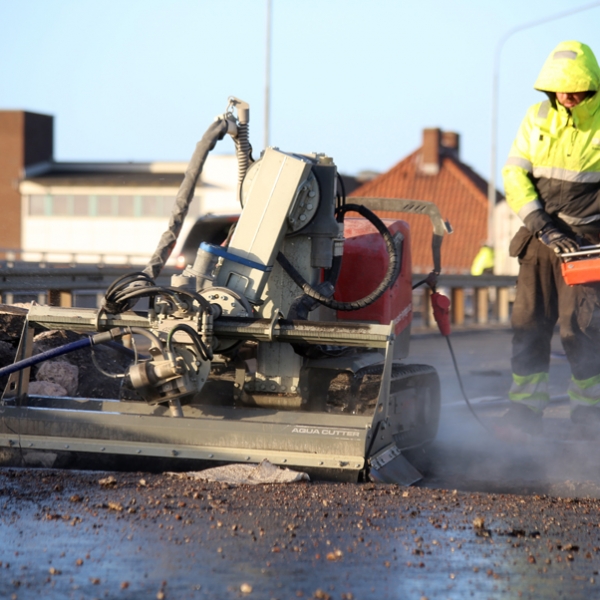 On its latest contract for SVB-Tyringe, the AQUA CUTTER 410 has been removing concrete to expose and remove the damaged expansion joints on a busy bridge in the centre of Helsingborg, on the West coast of Sweden.
In a 14 days contract, SVB-Tyringe had to remove five concrete strips covering the expansion joints and rebar for inspection and possible replacement over the single side, dual carriageway. The AQUA CUTTER was also used over the bridge parapet so as to gain access to the edge-beam.

“The bridge is more than 50 years old and is a major highway in to the city centre,” said SVBTyringe director, Jonas Björk, “ When vehicles crossed the expansion joints it created a ‘bouncing’ effect,” he added.

“It was necessary therefore to remove the concrete and inspect the expansion joint and rebar.” In total more than 60m of concrete was removed across a 45cm width and to a depth of 30 cm to expose the rebar and expansion joint.

“I am not sure how we could have met the contract deadline without using hydrodemolition techniques particularly as we also had to comply with the additional specification of causing no damage to the rebar or the expansion joint.

“The AQUA CUTTER offered us the flexibility to carry out the removal task on schedule and without damage to the rebar and expansion joints,” Jonas confirmed adding, “Weighing just 1000kg, the 410 also offered ease of mobility across the site.”

“Taking delivery of the AQUA CUTTER allowed us to enter the hydrodemolition sector but at the same time, thanks to its flexibility, we are also able to use the unit for hydroblasting and industrial cleaning applications such as cleaning contaminated concrete on sedimentation tanks.”

“Although it is a small robot it has been designed to handle big jobs such as the bridge contract. With a simple change of attachment it can handle smaller jobs in a confined area,” enthused Jonas.

The AQUA CUTTER 410 has been specifically designed for hydrodemolition applications in confined areas such as concrete sewer pipes in urban locations, small tunnels and inside buildings with restricted space.

Working typically with between 700 to 2500 bar pressure and 60 to 180 l/min, the robot handles most concrete removal tasks on floors, walls and overhead applications.

With dimensions of just 2.0 x 0.78 x 0.99 m (LxWxH) the new robot can go through an ordinary door opening and operate inside a concrete pipe, on vertical, horizontal or overhead surfaces.

It will also replace many applications currently performed using manual hand lances – a high pressure gun operating at 2500 bar or more; providing a more safe and accurate operation with the robot. “We had always specialised in hand lance techniques but with the flexibility offered by the AQUA CUTTER l am a convert to the 410 and Hydrodemolition,” Jonas Björk confirmed.

The rugged 410 robot offers the same reliability, versatility and easy maintenance and low operating costs as the renown AQUA CUTTER 710 robot, and uses many of the same parts.