A walk in the park, on the pier

Specialist marine contractor Maagan Marine & Diving Works Ltd is using Hydrodemolition techniques to remove decayed concrete from the East Pier at the Port of Haifa, during a three-year project to rebuild the pier, with a new Aqua Cutter 710V evolution from Sweden’s Aquajet Systems AB. 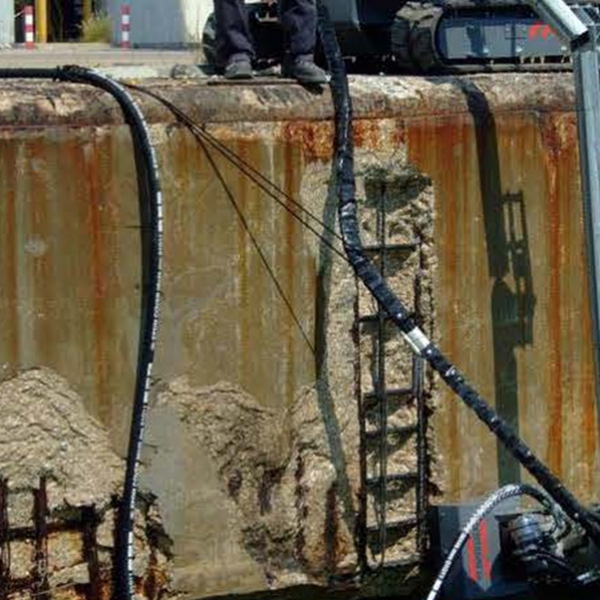 Compared with traditional operation using jackhammers, the Aqua Cutter 710V, is able to replace between four and five hammers during a single shift, and also leaves a cleaner finish on the rebar of the pier; which is being left in situ for the reconstruction.

Maagan Marine’s chief executive officer Avi Ben-David says that no jackhammers are being used and that the Aqua Cutter has increased accuracy and productivity while reducing manpower and the risk of ‘white finger’ from vibration for the operators.

“We consider ourselves an innovative company, and we always seek to find, incorporate, and deploy new technologies which allow us not just to meet our goals, but to exceed them,” he says.

“We have found the Aqua Cutter robot a good solution both to the project requirements and to the tight schedule, and it has allowed us to reduce the planned timeframe.”

Maagan Marine, which was formed in 1987 and is based in Haifa, employs more than 60 personnel, including engineers, divers, construction workers and heavy equipment operators, and works in the sectors of marine and port construction, diving works and salvage, dredging and excavation, and environmental protection.

The Aqua Cutter 710V is the first Hydrodemolition robot to be used in Israel by Maagan and was delivered during the project organisation stage.

The Port of Haifa is the second largest of Israel’s three major international seaports, a natural deepwater harbour that operates all year long, serving both passenger and merchant shipping. It is one of the largest ports in the east e r n Mediterranean in terms of freight volume and handles over 22 million tons of cargo each year.

During 1994, due to high levels of corrosion the pier was treated with epoxy paint and was extended by 277.5m, taking it to a length of 964.

“Due to the age of the pier, and the wear and tear it has undergone, the condition of the concrete was deteriorating to the point that the rebar was showing through in some places,” says Mr David.

“The Port Authority decided on a renovation of the pier, and we were contracted to remove the old concrete and undertake the renovation.

“The removal of the old concrete requires some precise removal work, because the rebar itself is still in good condition and will form the basis of the new construction and concrete work.”

The tidal level at the pier is around ± 0.5m, but as the pier was initially built at maximum tidal level, there is no underwater work involved.

Mr David says that the Hydrodemolition operation takes place for between six and seven hours per day, six days per week, and this will be consistent for the duration of the whole project, which was originally set for a three-year period but will be significantly reduced, thanks to the Aquajet Aqua Cutter.”

“A typical shift is about 10 hours, and we are using the robot for two-thirds of this time,” he says.

“We are handling an area of about 8m² per shift, to a working depth of 17cm, and had we been using jackhammers we would have needed four or five of them working simultaneously to achieve this kind of progress.

“Our operators are also very happy with the machine, they are very positive indeed with using the robot and they are highly pleased with the quality of the work they are delivering.”

The Aqua Cutter 710V evolution has the flexibility of cutting head to execute all possible operations, the operator with the remote control being able to reach all areas and to send the robot into confined areas.

Equipped on this project with a hydraulically operated extension kit, the machine does not carry any towers or have any protruding arms.

Mr David says that the concrete being worked on is type B40, with the existing rebar within the pier of type ST-37.

“The existing rebar was found to be in good condition and therefore it will not be replaced,” says Mr David.

The original plan had considered using jackhammers to remove concrete from local areas, but the Aqua Cutter proved itself adept in both small, tight areas and in the larger areas.

“Using the Aqua Cutter robot has helped us very much both in terms of carrying the project and in furthering our reputation as an innovative company,” says Mr David.