UK contractor Rentajet Group (RGL) employed hydrodemolition techniques during underwater surface preparation on a bridge project in Northern Norway; ensuring significant cost savings and improved safety by eliminating the need for divers or other operatives, to be in the work areas whilst material was being removed. As no jackhammers were used the quality of bridge repair was also improved. 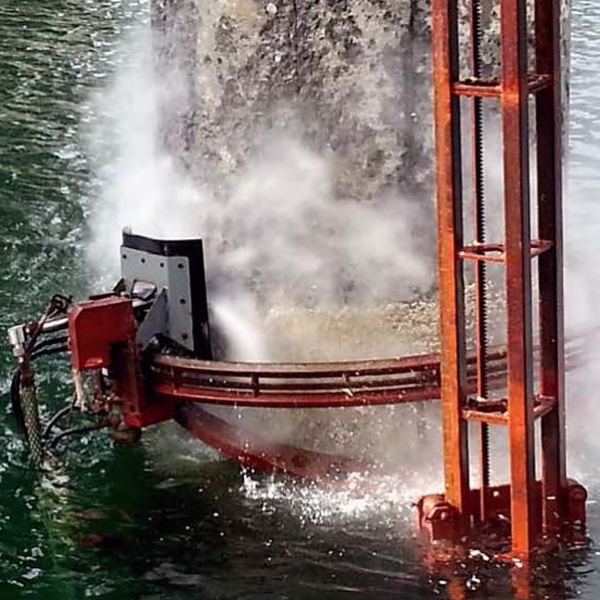 Constructed in the 1940’s, the columns of the Arstein Bridge in Northern Norway had suffered excessive degradation of the concrete and steel reinforcement, particularly in the splash zone.

The concrete-constructed, single carriageway bridge includes 11 pairs of columns. Each pair of columns is joined at a low level, but above water, by a crosshead beam.

Below the beam, the columns are 1500mm diameter and above the beam to the underside of the bridge deck reduce to 1000mm.

The Norwegian contractor Multibetong appointed RGL to undertake the specified removal of all growth from around the columns, and any damaged concrete below the crosshead beam down to the Fjord bed level, a depth of approximately 16m.

The columns were prepared ready for stainless steel reinforcement to be fixed prior to reinstatement of a new concrete case.

The depth of damaged concrete ranged between 25 – 150mm and in total more than 1500m² was treated. Hampshire, UK-based, RGL, purpose ordered the new Aqua Spine system from Aquajet Systems UK distributer, Aquapower Ltd, together with a bespoke 1500mm dia pile ring multi-modular frame system with special clamp legs to fix to the column.

Working remotely, from a barge, the operator was able to set the jet angle, number of passes and speed of travel of the Hydrodemolition head. The system was set to make a controlled traverse in a complete circle of the column, before ‘auto indexing’ to the next level and continuing until the cycle was completed – i.e. the length of the Aqua Spine at 6m.

Divers then released the clamps and the frame was lowered by crane to the next level and reclamped. The cycle then continued.

Jeremy Twigg, RGL’s Commercial Director, confirmed that, had the company employed divers for the underwater preparation work, it would have taken 10 times longer. “Plus,” he added “the quality achieved by the Aqua Spine was so much better.”

Supplied with a Power and Control Unit, it features Aquajet’s patented Intelligent Sensing Control (ISC). An advanced sensing system, it features no electronics, such as sensors or cables, exposed to the moisture environs – resulting in a more efficient production with fewer stops due to problems with, for example, sensors.

“We particularly liked the Aqua Spine’s wireless controller and ISC sensorless control,” commented Jeremy Twigg. “It greatly helped towards ensuring continuous reliability in the harsh environment at Arstein; working in deep water and temperatures below 4ºC.

“We have found the Aqua Spine to be the ideal solution both to the project requirements and to the tight schedule. It certainly allowed us to reduce the planned timeframe.” said Jeremy Twigg.

Between 50 – 250mm of concrete per pass was removed depending on the condition of the concrete, with only damaged concrete being removed. On average each column was completed in 2 – 3 days.

The depth of the fjord was 16m which meant as work progressed, underwater checks were carried out both by divers on hand and through underwater camera surveillance to ensure that an even finish was achieved across each column.
The project ran for a total of three months with all 22 columns being completed.