The project was the largest Hydrodemolition undertaking in the state’s history. With a number of bridge decks on I-70 between Cove Fort and Sevier showing signs of significant wear, the Utah Department of Transportation (UDOT) knew they were looking at a major repair operation. The 20-mile project included replacing the deck concrete on 14 parallel bridges to extend the life of the structures and provide a better driving surface.

UDOT hired W.W. Clyde & Co. as the project’s general contractor. The company is a heavy civil construction firm based out of Orem, Utah. W.W. Clyde then hired Lyman, Wyoming, based Redi Services to remove the top 4 inches of the 8-inch concrete bridge deck. The contractor provides a number of services, with a focus on hydro-blasting.

Work began in April 2018 with an end date set for late 2019. For this to happen, W.W. Clyde needed to maximize efficiency with each phase. And it all hinged on Redi Services completing demolition on schedule and within budget. 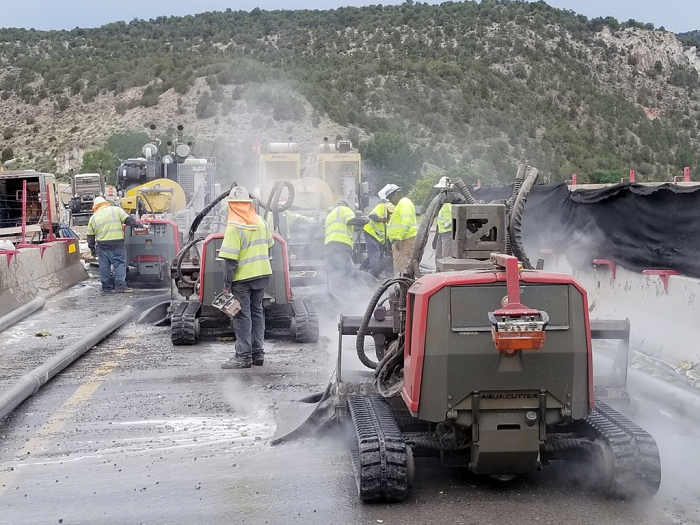 To remove concrete from 14 bridges in such a short span of time, UDOT officials knew a new method was required and conducted a study in 2016 and 2017 to determine what treatment could be used. The study found that Hydrodemolition would provide the necessary speed to limit traffic disruptions and cost significantly less — just $14.4 million compared to $29.7 million to reconstruct the bridge decks and $300 million to replace the bridges entirely.

However, before demolition could begin, Redi Services needed to set up a system to retrieve all of the debris and used water, as well as recycle as much as possible. UDOT set environmental protection as a No. 1 priority and some of the bridges spanned Class A waterways, contamination of which could mean heavy fines and loss of eligibility to work on future government projects.

Using three robots simultaneously, crews spaced the Aqua Cutters about 20 feet apart to remove the top 4 inches of the 8-inch bridge deck concrete. They left one inch between the remaining concrete and the rebar. Together, the robots removed about 60 cubic yards of concrete a day. Each machine jetted about 24,000 gallons of water per 10-hour shift.

“The technique was extremely effective,” said Cody Austin, Redi Services Nevada area manager. “With chipping tools there is no way to know whether you are through all of the decomposed concrete. With these robots, the removal depth is always even. Plus, there’s almost no risk of damage to the rebar or the structurally sound concrete.”

To prevent gray water from escaping, the contractor set up an efficient collection system that involved strategic dams, vacuum trucks and water filtration equipment developed by Redi Services, Adler Tank Rentals, and W.W. Clyde that processed 150 gallons a minute, as well as conducted pH treatment on the wastewater. In this way, Redi Services was able to reuse 180,000 gallons of water.

Each day of the project, a 13-person crew worked 10-hour shifts with the robots, followed by two hours of routine maintenance that included cleaning, oiling and greasing the robots, looking for debris buildup and replacing wear parts.

“These machines take a beating as a result of the high-pressure water, so neglecting maintenance is a bad idea,” Austin said. “We took good care of them and kept plenty of spare parts on hand.”

Median crossovers were installed where possible to divert traffic off of a bridge and onto the parallel road, allowing Redi Services to complete an entire structure at once. When that wasn’t possible, crews completed one lane at a time.

Because bridge barriers remained in place during the project, Redi Services didn’t need to set up any fall abatement systems. However, to protect workers, traffic and nearby structures from debris, Redi Services installed 8-foot-tall barriers around the work zone. Crews also added extra rubber around the water jets to further reduce the chance high-speed bits of concrete escaping. In addition, workers near the robots wore PPE, including rain suits, hard hats, impact gloves, safety glasses, face shields and blast boots.

At the end of the project, the Redi Services saved an estimated 1 million gallons of water as a result of recycling. Workers removed about 3,300 cubic yards of concrete, most of which was recycled.

“Hydro-blasting contractors used to have a reputation for being wasteful and not doing much to catch and treat the wastewater,” Austin said. “UDOT officials, impressed with our collection and recycling efforts, tell us they expect there will be a lot more Hydrodemolition jobs on the horizon.”