The Pensacola Bay Bridge, also known as the Three-Mile Bridge, connects downtown Pensacola to Gulf Breeze, Florida. The four-lane bridge is a major artery of US Highway 98 across Pensacola Bay. The bridge structure is built on piles which support a system of trophies, support beams and a cast-in-place concrete bridge deck.

In September 2020, during Hurricane Sally, the bridge sustained significant damage. During its closure, the Garcon Point Bridge, south of Milton, Florida, was used to detour traffic. Approximately 24 miles from the Pensacola Bridge, this route has led to 30-90-minute delays. The bridge reopened to the public right before Memorial Day weekend in May 2021.

Hurricane Sally left the bridge with severe structural damage caused by barges that became unmoored during the storm. Many of the affected areas requiring section removal were located in isolated sections and could only be accessible by boat and barge. 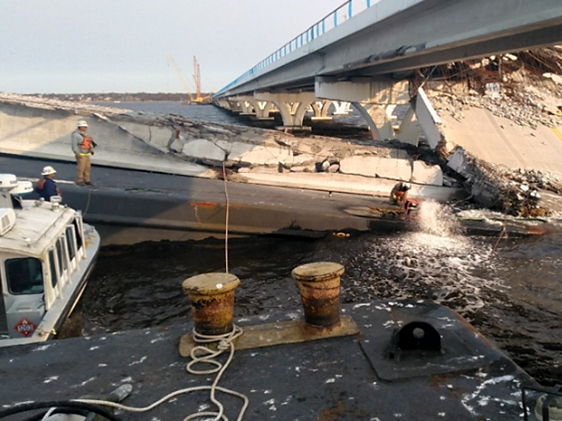 Days of hand chipping proved ineffective compared to the mock-up conducted by Rampart using their state-of-the-art Aquajet robotic units (models: Aqua Cutter 410A and Aqua Cutter 710 H), to remove approximately 6.5” to 10” in depth along the edge of the concrete bridge deck sections in one pass. 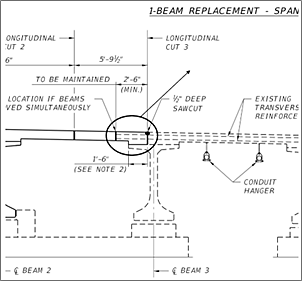 Crews leveraged a hydrodemolition solution to aid in achieving the repair design of the affected bridge decking sections.

Hydrodemolition provided clean and undamaged reinforcing steel in the overlap area. Additionally, hydrodemolition did not cause any microfracturing of the existing adjacent substrate left in place, which is typically a result of pneumatic chipping hammers. Microfracturing can lead to poor bonding surface and may provide an avenue for chloride contamination. The hydrodemolition cleaned the reinforcing free of all rust and scale which alleviated the need for sandblasting.

As part of the Skanska safety plan, leading edge protection was achieved with a cable stanchion system, where hydrodemolition operators were tied off to retractable lanyards. In addition to the standard hydrodemolition PPE, operators were also equipped with life jackets as the crews worked on and around open water.

Maximum production was achieved by placing several 18,000-gallon potable water storage tanks on barges. A containment barge was placed below the removal area to capture debris and wastewater. A series of pumps were placed on supporting barges and ferried to various locations along the three-mile bridge where isolated sections of the bridge remained in-tact. Recharging the potable water supply on the barge required tugboats moving the barge to a land-based water fill-up station miles away. A charged water barge could service the robotic equipment for several days before recharging was required.

The Aquajet robotic equipment was chosen due to its lightweight configuration and its evolution programing system, giving the ability to cut various depths in one traverse pass with its oscillating nozzle and adjustable angles up to 45 degrees. Depths ranged from 6.5” to 10” in one pass.

The Aquajet robots also featured the patented Equal Distance System (EDS) that keeps a preset distance from the nozzle to the concrete surface, regardless of the attack angle of the water jet. This is a major advantage. The water jets lose a lot of power before hitting the concrete in standard systems without EDS.

Adding to the efficiency, the Aquajet robots are equipped with a ceramic nozzle tip. The ceramic nozzle generates a longer length of the cohesive water jet stream and the high coefficient of discharge makes the nozzle very efficient for deep removal. These nozzles provide more removal, longer lifespan (up to 300 hours), cost savings, and minimum down time for changing nozzles.

The crews worked at night, seven days a week and at times during the day, as time was of the essence in opening the bridge to traffic. The innovative design of the Aqua cutter 710H and 410A provided unrivalled ease of access for all routine maintenance, which meant less downtime for maintenance and more time for actual work. The Aqua cutter 710H is a heavier system than the 410A, but both have a smart design, specifically geared for efficient horizontal operations. The front power head can move and tilt sideways to pass obstacles and compensate for inclined surfaces.

With no downtime in the schedule for preventive maintenance, back-up pumps were placed in the work area to allow for pumps to be taken out of service for maintenance. Aquajet manufacturer provided timely remote assistance when operators had technical questions.

Rampart used a combination of Jetstream and NLB 40K psi pumps on the project. Both sets of pumps proved to be reliable and effective.

Pre-planning and re-planning were essential in coordinating the efforts of all involved, not only in the hydrodemolition work, but the support services. Communication between tugboats, cranes, crew ferries, weather watch, deliveries, and work locations proved to be a logistical challenge.

“This project was successful based on our ability to communicate as a team and pre-plan/re-plan as the schedule changed daily,” said Rampart Hydrodemolition Superintendent, John Eastman. “Good reliable equipment such as the Aquajet robots and pumps helped when we were isolated out on bridge sections in the middle of the night!” 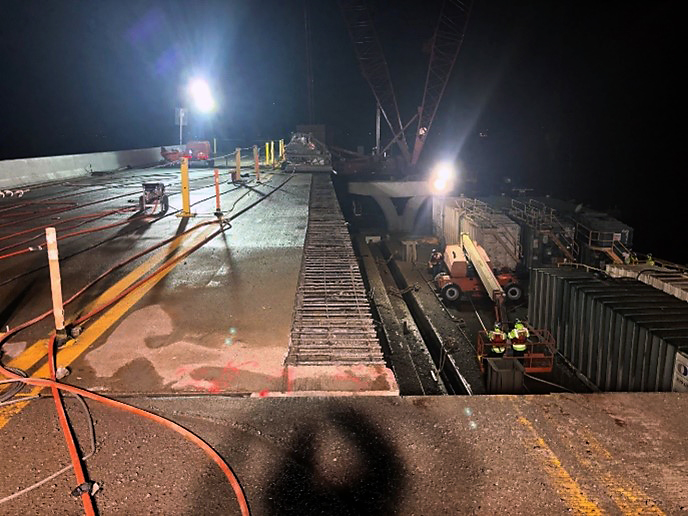 Despite an ever-changing schedule and weather conditions the team worked seven days a week to perform the work. Cold weather, wind and rough bay water wreaked havoc on some days but the team was able to successfully perform the hydrodemolition process.

“The Pensacola Bay Bridge project was unique and by far one of the most challenging projects for us at Rampart. Our Team did an outstanding job working together through the tough schedule and the below freezing temperatures,” said John Paddock, Hydrodemolition Lead Operator for Rampart.

Outside the work performed at the Pensacola Bay Bridge, bridge widening across many of America’s roadway infrastructure to accommodate increasing traffic volume is common practice.

In the widening process, abutting a new bridge section to an existing bridge section will require overlap of new to existing reinforcing steel. These critical areas will require quick and non-damaging concrete removal methods that are cost effective. With the high cost of labor and damaging effects of traditional impact methods, hydrodemolition is a valuable solution that should be considered.

Hydrodemolition project:
Removal of existing concrete in the overlap area along 2,386 ft of the exposed edges of the bridge, so that clean and undamaged reinforcing steel could be exposed.